A young alumna is determined to leave her mark on UNT 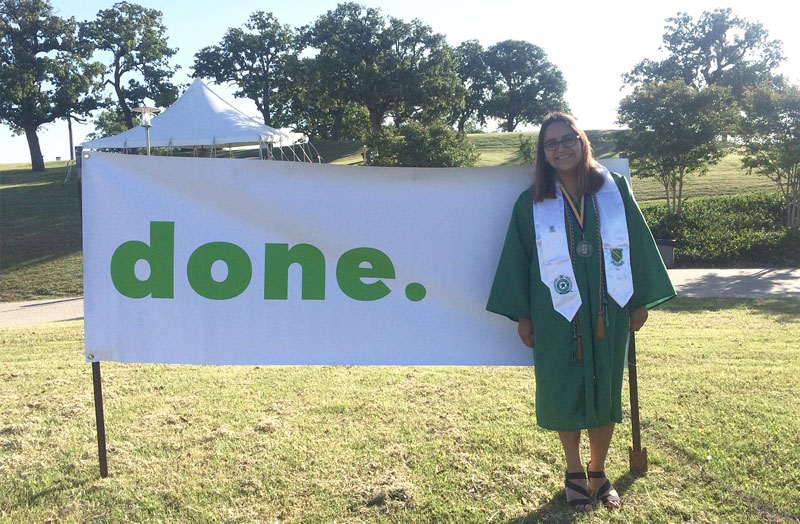 Gabby Ibarra (’16) was drawn to the University of North Texas from the first moments of her campus tour. There wasn’t any thought or debate — UNT was where she wanted to begin her future.

“Walking around campus, I just felt home. That’s the only way I can describe it,” Ibarra says.

After such a magnetic introduction to UNT, Ibarra was blindsided by the crushing anxiety she felt during freshman orientation. She wasn’t sure she could withstand the pressure of registering for classes, much less four years of college. Ibarra made it to campus in the fall, but hit a breaking point when her interest in crime scene investigation didn’t help her thrive as a forensic science major. Feeling insecure and alone, she called her parents and begged for permission to move back to San Antonio.

“Give UNT a full year,” they said. “Then we can reevaluate.”

She agreed to their terms, and has maybe never been more grateful for a single choice.

Ibarra was unnerved by the future, but the UNT community helped her find confidence and direction. Under the eye-opening guidance of her academic counselor, Renee LeClaire McNamara, Ibarra did some soul searching that pointed toward a path she had never considered: social work and rehabilitation studies.

“I knew it was my way forward,” Ibarra says. “I knew I was supposed to be helping people.”

Once she had a foothold in academic success, Ibarra began to embrace the Mean Green spirit. She was looking for more than just a college degree — she wanted to create a life at UNT filled with the energy that had captivated her on the campus tour.

Ibarra became a determinately spirited student, attending events and collecting enough free T-Shirts to make a Mean Green blanket. She collected memories, too — especially as a member of the Talons and the Student Alumni Ambassadors. The grueling, fantastic memory that takes up the most space in her mind? Building the homecoming bonfire.

“It was such a task. Endless days and endless nights trying to create something the entire school could enjoy.”

She recalls that a bit of blood, a lot of sweat and a few happy tears were lost in the process. Mainly, though, she remembers her first bonfire as the moment that cemented her choice to stay.

Ibarra committed herself to upholding UNT traditions and serving the community. She worked as a leader at Eagle Camp and parent orientation, assisted incoming freshmen during First Flight Week, participated in the Eaglethon in support of Children’s Miracle Network Hospitals, and frequently tabled in the Library Mall to raise money for UNT students in need. In recognition of her tireless efforts, Ibarra was honored with the inaugural Golden Eagle Award — the most prestigious award that the university bestows upon a student leader.

The soft-spoken young woman, who had questioned her ability to survive freshman orientation, found strength and purpose at UNT.

After serving as president of the Student Alumni Association, it’s no surprise that Ibarra places a high value on the importance of staying involved with your alma mater.

“I try to tell people that you really do want to be in touch with your fellow alumni. They can orient you and lead you to so many great paths that you don’t know exist,” she says.

These days, Ibarra feels like a walking advertisement for the power of attending alumni events and connecting with fellow grads. She doesn’t meet a stranger at chapter mixers or in the Alumni Pavilion at Apogee Stadium — if you’re wearing Mean Green and a smile, you’ll likely receive a hug or handshake from Ibarra and find yourself pulled into a great conversation. And no one is more earnest than Ibarra in spouting off the perks of joining the UNT Alumni Association, everything from scoring Mean Green swag to engaging in valuable networking opportunities.

“UNT keeps preparing me for all things,” she says. “Even the things I’m not expecting.”

The UNT family met Ibarra where she was and helped her along, and now she is committed to doing the same for others.

“There are a lot of ways to make a difference. I see staying connected and sharing my experiences as a way to give back to UNT and help future alums.”

Ibarra practices what she preaches. Just three years after graduating, she is already a lifetime member of the Alumni Association and has earned the status of a Loyal Eagle — a designation given to donors who have made a gift to the university for two or more consecutive years.

She has high hopes that more young alumni will choose to stay connected, both because of the joy it brings and the impact they can have on the university.